Andrea Clearfield is a full-time composer of music for orchestra, opera, chorus, chamber ensembles, dance, film and multi-media collaborations. Clearfield creates deep, emotive musical languages that build cultural and artistic bridges. She has been praised by the New York Times for her “graceful tracery and lively, rhythmically vital writing”, the Philadelphia Inquirer for her “virtuosity”, “compositional wizardry” and “mastery with large choral and instrumental forces”, Opera News for “vivid and galvanizing music, achieving a timeless beauty” and by the L.A. Times for her “fluid and glistening orchestration”. Her works are performed widely in the U.S. and abroad. She is a recipient of a 2016 Pew Fellowship in the Arts and a 2017 Independence Foundation Fellowship in the Arts.

Among her 140 works are ten cantatas including one commissioned and premiered by The Philadelphia Orchestra. Her 2012 cantata, Tse Go La (At the threshold of this life), for double chorus, chamber orchestra and electronics, co-commissioned by the Mendelssohn Club and the Pennsylvania Girlchoir was inspired by her treks documenting Tibetan music in a restricted northern Himalayan region of Nepal. Other works inspired by her fieldwork include Lung-Ta and Kawa Ma Gyur, commissioned and premiered by Network for New Music, and Rabsong Shar for soprano and chamber orchestra, commissioned and premiered by the University of Arkansas New Music Ensemble. Her trio, “and low to the lake falls home” was commissioned and premiered by internationally acclaimed flutist, Carol Wincenc with New York Philharmonic principal players Cynthia Phelps and Nancy Allen. Her work Convergence was released on Bridge Records to critical acclaim (Convergences: Johannes Brahms & Andrea Clearfield) with Barbara Westphal, viola and Christian Ruvolo, piano. She is currently completing an opera on the 11th Century Tibetan yogi, Milarepa, commissioned by Gene Kaufman and Terry Eder to libretto by Jean-Claude Van Itallie and Lois Walden for NYC 2019 premiere, Kevin Newbury director.

Dr. Clearfield has been awarded international fellowships at the American Academy in Rome, the Rockefeller Foundation’s Bellagio Center and Civitella Ranieri in Italy, Fundaciòn Valparaiso in Spain, Moulin à Nef in France, Tyrone Guthrie Centre in Ireland among others. U.S. fellowship awards include Yaddo, The MacDowell Colony, Wurlitzer Foundation, Montalvo, Ucross, Blue Mountain Center, Wurlitzer Foundation of New Mexico, the Copland House and the Virginia Center for the Creative Arts. She has been invited as visiting composer to numerous universities and colleges including University of Texas at Austin, Curtis Institute of Music, University of Chicago, Michigan State, University of Arkansas, the College of New Jersey, Dartmouth College, Hartt School of Music, College of William and Mary, Penn State and the St. Petersburg Conservatory in Russia. Clearfield is also in demand as a curator, speaker and adjudicator for national arts foundations, artist residencies and performance competitions.

A native of Philadelphia, she received a D.M.A. in Composition from Temple University where she studied with Maurice Wright, was a two-time recipient of the John Heller Memorial Award for Excellence in Composition and holds the distinction of being the first composer in the history of the University to receive the prestigious University-wide Presidential Fellowship. She was honored by Temple University as a Distinguished Alumna. She received an M.M. in Piano from The University of the Arts where she studied with Susan Starr and served from 1986-2011 on the composition faculty. She graduated with Summa Cum Laude and Phi Beta Kappa honors from Muhlenberg College, where she received a B.A. in music and received the Alumni Achievement in the Arts Award. Active as a pianist, she has performed with numerous groups including the Court of the Dalai Lama and has been the pianist in the contemporary music ensemble Relâche since 1990. Now celebrating its 30th year, Clearfield is also the founder and host of the renowned Philadelphia Salon, featuring contemporary, classical, jazz, electronic, multimedia and world music and winner of Philadelphia Magazine’s 2008 “Best of Philadelphia” award. She is also curating and hosting Salon concerts around the country. More at www.andreaclearfield.com

Photo by Ryan Collerd, courtesy of The Pew Center for Arts & Heritage. 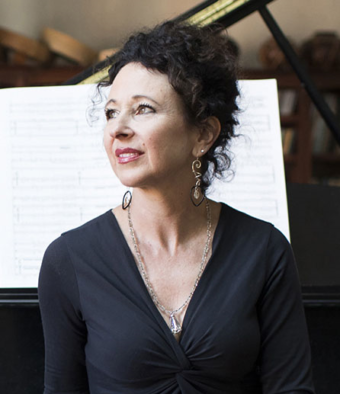