Program Notes by the composer

“During my term as Music Director for the Knoxville Symphony Orchestra from 2003 to 2015, I had the opportunity to collaborate with some of the finest musicians in the region while forging friendships that have subsequently continued. One such friendship has been with D. Scot Williams who, in addition to being a tenured member of the KSO cello section, is also a wood-crafting artisan. Several years ago, Scot created a beautiful conductor’s stand, designed to my specifications, which I happily continue to utilize for all of my concerts with the Bangor Symphony.

Scot contacted me in March, 2017, with the request that I might compose a solo cello work which would befit a worship service. The resultant piece is Adoration, a one-movement work that develops five musical notes assigned to “D. Scot” into motivic material that suggests the humble gestures of genuflection.

Adoration is dedicated with great appreciation to D. Scot Williams and received its world premiere on Sunday, June 25, 2017 at the Episcopal Church of the Good Shepherd in Rangeley, Maine, during Scot’s yearly visit.” 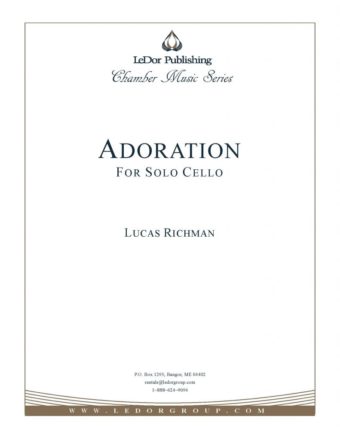