“For Harvest Time” – a Prelude of Dances for Symphony Orchestra

For Harvest Time, received its broadcast premiere on the radio program “Orchestras of the Nation” on March 5, 1949. It was performed 1950 by the Baltimore Symphony Orchestra, Reginald Stewart, Conductor. In 1952 Rafael Kubelik conducted the first Chicago Symphony Orchestra performance.

Note from the composer:

The Prelude of Dances, “For Harvest Time” was composed with the intention of projecting simple musical concepts in terms of basic rhythmic patterns: the essential elements of folk music. The words of the title “For Harvest Time” are not meant to convey the thoughts of any particular phase of farm activities, rather, the spirit of a way of life of people who live close to the soil.

The suggested note of symbolism is given by the trumpet: the bugle calls become transformed into country tunes and folk dances. 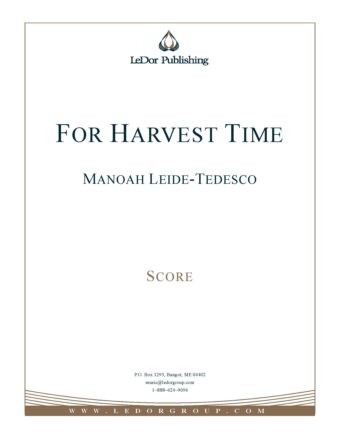