A song of empowerment for breast-cancer awareness.

The resultant song of inspiration and empowerment, We Share A Bond, was premiered on Mother’s Day that year by a choir of breast cancer survivors and members of the Pittsburgh Symphony.  Performed annually in Pittsburgh since then, the song was introduced at Knoxville’s Race for the Cure in October, 2004.  The Knoxville Affiliate subsequently approved a grant in order to fund an official recording of the song.  The Knoxville Symphony Orchestra recorded the instrumental tracks in May, 2005.  A choir of breast cancer survivors and supporters was assembled in Los Angeles to record the vocal tracks in September, 2005. Partial proceeds from all purchases of the recording, scores and/or instrumental parts are donated to organizations that serve as advocates for breast cancer patients and survivors.

WE SHARE A BOND
Music and Lyrics by Lucas Richman

Chorus:
WE SHARE A BOND
THAT GOES BEYOND OUR PRIVATE FIGHT
WE SHARE A GOAL
TO HAVE THE WHOLE WORLD UNITE
FOR TOGETHER WE CAN WIN
OUR BATTLE TO SURVIVE
TOGETHER WE HAVE STRENGTH TO STAY ALIVE.

WHEN I LOOK BACK
ON THE DAY I FOUND OUT
THAT MY WORLD HAD BEEN SHAKEN AT THE CORE,
I CAN STILL FEEL THE LOVE
FROM MY FAMILY AND FRIENDS
THAT HELPED ME PREPARE FOR THE STRUGGLE YET IN STORE.

I REMEMBER WAITING
AND HOPING FOR SOME NEWS
THAT MIGHT SHED A LITTLE LIGHT ON THE UNKNOWN.
BUT THEN, INSTEAD OF WAITING,
I REACHED OUT TO A FRIEND
WHO HELPED ME UNDERSTAND THAT I WASN’T ALL ALONE.

HOW MANY TIMES
HAD IT BEEN SOMEONE ELSE
WHO SAW HER LIFE GROW SHORTER EVERY DAY?
NOW IT WAS ME
IN THAT SOMEONE ELSE’S SHOES
BUT THIS IS WAR AND NOTHING’S GOING TO GET IN MY WAY!

I MAY STILL HAVE FEARS
BUT I’VE TAKEN BACK CONTROL
‘CAUSE MY THIRST FOR LIFE CANNOT BE SATISFIED.
I DRINK OF LOVE AND TIME
AND I SHARE WHAT I HAVE LEARNED
WITH OTHERS WHO MUST KNOW HOPE AND FAITH CAN TURN THE TIDE. 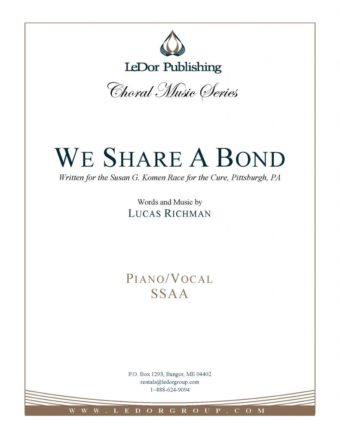