Concerto for Oboe and Orchestra: The Clearing – Piano Reduction

Maestro Richman writes the following about his work:

In the summer of 2004, upon the completion of my sixth and final season as a member of the Pittsburgh Symphony’s conducting staff, I was offered a commission to write a work for the PSO and its principal oboist, Cynthia DeAlmeida.  I was delighted with the opportunity to add to the oboe repertoire a concerto that could highlight Cynthia’s beautiful lyricism and virtuosic technique while also honoring the individual members of this world-class orchestra.

The 23rd Psalm figures prominently in the overall concept of my Concerto for Oboe and Orchestra.  To me it conveys a moment of epiphany, expressed in gentle acceptance and understanding, that becomes the quiet climax of the work.  Taking the vocal rhythms of the psalm’s Hebrew declamation, I began writing the concerto by setting the words in the solo oboe part as a simple prayer.  From this prayer evolved the musical material for the rest of the work.

The “clearing” of the subtitle is the place in which the epiphany or spiritual reconnection occurs, and is meaningful on several levels.  The more common understanding of a “clearing” on a physical level would be an open area one might reach after struggling through a dense forest, while the term also suggests a purification of mind and spirit after having fought through the trials and obstacles with which we are faced in life.

The concerto is constructed with five distinct sections linked together into one movement.  Beginning with a plaintive melody of descending tones, the introductory section presents a character prior to entering the symbolic forest of life.  A surging tempo stirs the character to life and the reminders of spiritual insight and connection become distant memories with the onslaught of earthly reality.  A broad melody becomes the orchestral highpoint of this second section, stemming from the phrase, “Gam ki aylach b’gay tzalmavet…” (“Yea, though I walk through the valley of the shadow of death”).  This phrase is presented thereafter in its full form by the oboe in the ensuing prayer, as the character has finally found the clearing.  With a simple, child-like, acknowledgement of innocence lost and then re-found, the prayer leads to a brief section of recapitulation.  By resigning pride and ego and by accepting divine assistance, the character celebrates in the concerto’s last section, dancing a final dance of affirmation. 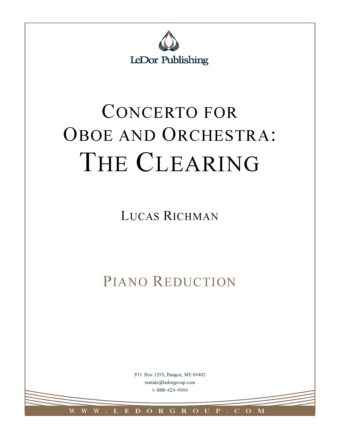