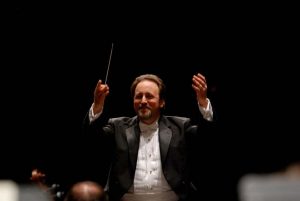 BSO Pulls out the Stops to Honor its Maestro

ORONO — The Bangor Symphony Orchestra delivered a rousing tribute Sunday, Oct. 6, to Music Director and Conductor Lucas Richman, who is celebrating his 10th season, through a variety of musical genres including the world premiere of American composer Kathryn Bostic’s “Tovaangar: Coronation and Chaos” and the performance of Korean violin prodigy  SooBeen Lee.

Bostic, addressing the audience before the performance at the Collins Center for the Arts, said she was inspired by “this time of great change” to write this “tribute to our great land.” She explained that “Tovaangar” is the word used by the Tongva people of Southern California to describe their world.

Skillfully employing a large orchestra, Bostic created a musical narrative full of contrasting episodes. The brass section was forceful, the strings by turns lush, undulating and wistful. Fine details were etched by the winds, harp and percussion.

Although solo passages for the violin raised a hopeful note, a hymn-like ending faded away, with a trumpet call that hung in the air like a question. “The Village Romance” by veteran film composer James Newton Howard followed. A compilation of music from the 2004 mystery “The Village,” the piece featured a solo violin meant to portray the film’s blind heroine, Ivy.

The orchestra accompanied violinist SooBeen Lee as she began with a haunting, angular melody. For most of the rest of the piece, the violin part wandered in nervously repetitive patterns. Lee’s evocative rendition of a brief cadenza signaled the ending. Lee was given a chance to show off her skill in Pablo de Sarasate’s Fantasy on Bizet’s “Carmen.” Written on familiar themes from the opera — the entr’acte to Act IV, the “Habanera,” Carmen’s taunting of Zuniga from Act I, the “Seguidilla,” and the Carmen/Frasquita/Mercédès trio — the Fantasy is a nonstop showpiece for violin. Lee, who at 19 has racked up an amazing list of performance and competition credits, attacked the challenging score with power and agility.

The program closed with Maurice Ravel’s orchestration of Modest Mussorgsky’s “Pictures at an Exhibition.” Mussorgsky’s original version, a suite for piano, was inspired by an exhibition of the artwork of his late friend, Viktor Hartmann, who along with the composer had been a champion of Russian art.

Maestro Richman and the orchestra gave a colorful performance of the suite’s ten movements. They began with a rather stolid opening in the brass section of a recurring promenade theme that unifies the suite, through a playful depiction of a child’s toy in “The Gnome.” Next up was an appropriately exotic alto saxophone solo by Glen Sargent in “The Old Castle,”  followed by William Dietz on tuba in a brilliant impersonation of a lumbering oxcart. The animated strings and winds portrayed marketplace gossips, glowering low brass in “The Catacombs,” and a breathtaking ride with Baba Yaga in “The Hut of Fowl’s Legs.”

The grand finale, “The Great Gate of Kiev,” with the full orchestra at top volume and rousing cymbal crashes and chimes, brought the audience to its feet. Like a grand fanfare for the season, the concert left the crowd in high spirits with great anticipation for what’s to come.

Featuring
As I Please
Composed by Kathryn Bostic
More Info